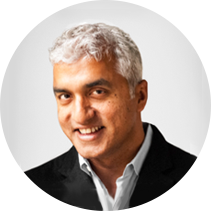 Sumant Mandal is Managing Director and co-founder of LA-based March Capital Partners, in addition to being a co-founder of two leading technology incubators in the San Francisco Bay Area; The Hive, focused on AI and Blockchain driven companies, and The Fabric, focused on cloud, IoT and network infrastructure companies. He has been part of incubating more than 25 companies. Sumant leads investments in Cloud Computing, IoT, AI/ML, and Network Infrastructure as well as companies supporting the Indian market. He currently serves on the boards of numerous market-leading companies, including Astound, BillDesk, CarTrade, IoTium, SparkCognition, Decision Engines, and Xage Security.

In 2000, Sumant joined Clearstone Venture Partners, where he went on to become a Managing Director four years later. Prior to Clearstone, Sumant spent more than eight years as an entrepreneur, starting companies in both India and the United States.

Sumant has an M.B.A. from the Kellogg Graduate School of Management at Northwestern University, and a B.S. in Electrical Engineering from Michigan State University. He is a Charter Member of TiE.